Stuff I've been making (other than video games)

Hey folks, it's been a while since my last post, but I've still been busy working on stuff. No real news with Peak Condition, but I've started a new game prototype which I will be posting about soon. First though, I thought I'd talk about some of the non-game projects I've been working on lately.

I ran across an artist named Sarah Haghayegh (aka Pixelosis) at a convention who makes awesome beaded classic video game sprites, and I thought it looked like a lot of fun. I've pretty much copied her idea, only I'm designing my own pixel art patterns instead of using existing sprites. Here are a few I've made for friends:

I've always enjoyed the austerity of pixel art design, and these definitely scratch that itch. When making retro pixel art sprites for games, I typically work with a self-imposed limited palette, so it's amusing to actually be restricted to the bead colors I've purchased. Once I've designed the pattern, the actual beading process is fairly rote. That means I can bead while carrying on a conversation, which is great for occasions like my weekly Make Stuff Night (which I've been meaning to blog about!) 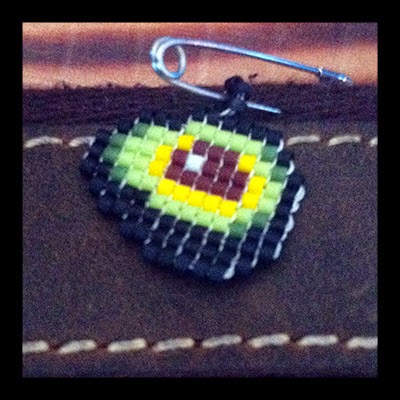 Feiya and I are going to Burning Man this year, and we're building a PVC shade structure called a MonkeyHut. The MonkeyHut is designed to shelter our tent from the sun while being flexible enough to stand up to strong desert winds. It's also cheap and easy-to-assemble. Here's a slideshow of our test-build in the park:

(Feiya took all the pictures, which is why you only see me working. Off-camera, Feiya was pounding rebar, bending PVC, and assembling the tent.)

The assembly was a success, and we discovered a few things we need to tweak. For example, we oriented our silver shade tarp incorrectly, which is why it doesn't reach the bottom of the PVC "ribs" in the last picture.

I've been stressing out over getting this thing made, so it was a huge relief to see it come together so well. Now I'm only slightly terrified that a strong wind will rip it up and fling it across the desert.

Another Burning Man related project I've been working on is my playa gift that I'll be giving out: handmade loaded dice. I bought some wooden craft cubes and went to work with Feiya's wood-burner to score the pips. The 6-side pips will actually be hollowed out and filled with Tungsten weight putty to weigh that side down and increase the odds of rolling a 1, which is represented by the iconic Man logo. Here's a picture of the dice in progress: 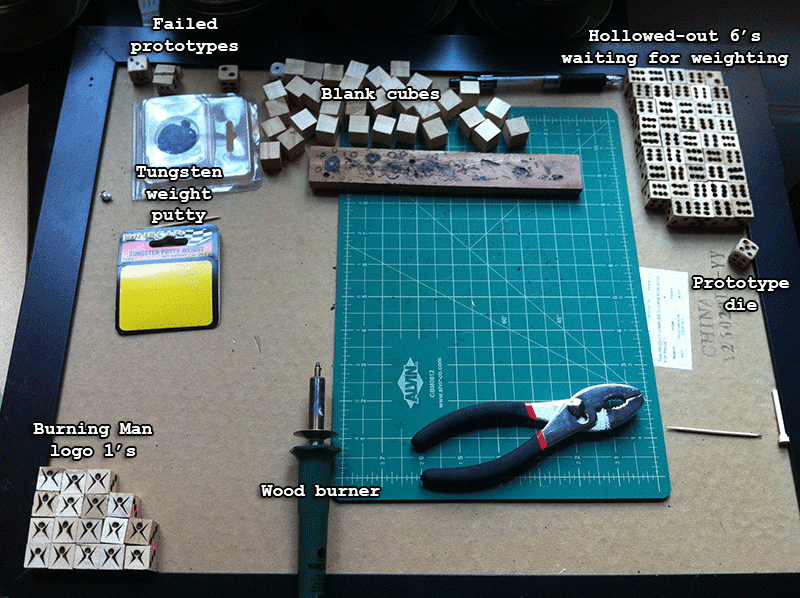 I'm making about 60 dice, so I've got plenty of work left to do. I've still got to putty most of them, sand their edges, touch up any pips that need it, and finish them with mineral oil. I've made a few prototypes to test the "loaded-ness" of the weighted pips, and I've gotten pretty good results. Here's a picture with a loaded die with tallies showing the test roll distributions: 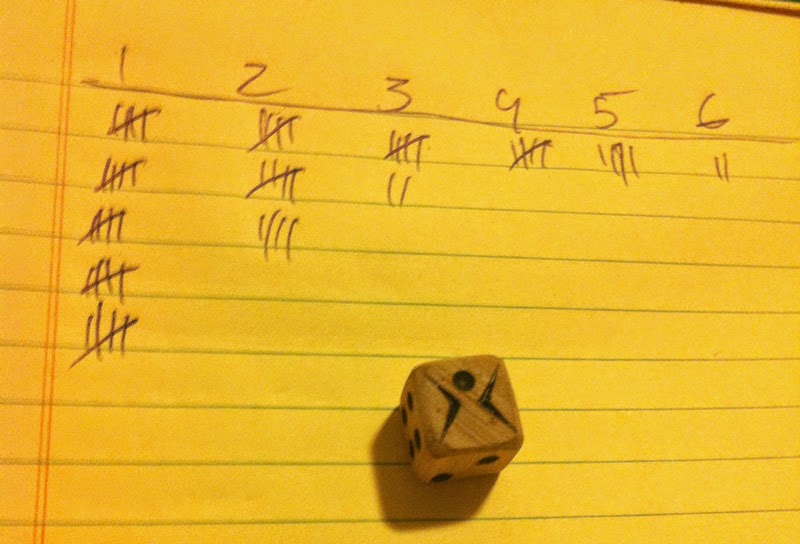 Well, that's all for now. Next time, I'll talk about the new video game prototype I'm working on!